There are many reasons a person is attracted to any organic product, most of which have to do with health and environmental impact.  The explosion of awareness regarding where our food comes from and what’s in it, as well as it how it impacts the environment, has people spending twice as long in any supermarket reading food labels like library books. This awareness spreads beyond the vegetable isle to the wine section of the supermarket, where health-conscious consumers have two categorising factors in mind for an organic wine when reading the label: no pesticides, or -cides of any kind, and no sulphites.

Over the years, speculations have spontaneously turned into facts, and every third person in a bar is quite certain that sulphites are the reason for their hangover

Now, while most consumers hit the nail on the head when it comes to the -cides, there is often a lot of confusion about the presence of sulphites in organic wine. From our experience as an organic winery, the discussion with the average consumer about the classification of organic wines often ends up spiralling onto a particular question: “so, if its organic, that means there’s no sulphites, right?”…  Very good question! This is in fact the question that made the regulations of organic wine so difficult to define in the first place! So, let’s chat about it…

Up until the 19th century, all wines were essentially ‘organic’ due to the non-existence of agrochemicals. With the advent of the petrochemical industry in the late 19th century, the use of agrochemicals, such as the ‘-cides’, began in winemaking to boost production and thus profit. Alongside this was the introduction of the additive sulphur dioxide (SO2), a type of sulphite, in wines to kill undesirable bacteria, prevent spoilage, hinder oxidation, and to chemically stabilize wine in the bottle.1,2 When the organic movement emerged in the 1900s, it was centred (as it still is today) around the desire and necessity to remove health-damaging chemicals from food products and conserve the environment for future generations. In addition, winemakers aimed to better preserve the terroir, or ‘taste of origin’, of the wine by omitting any additives that could interfere with the flavour. Basically, they wanted to return winemaking to its original form. 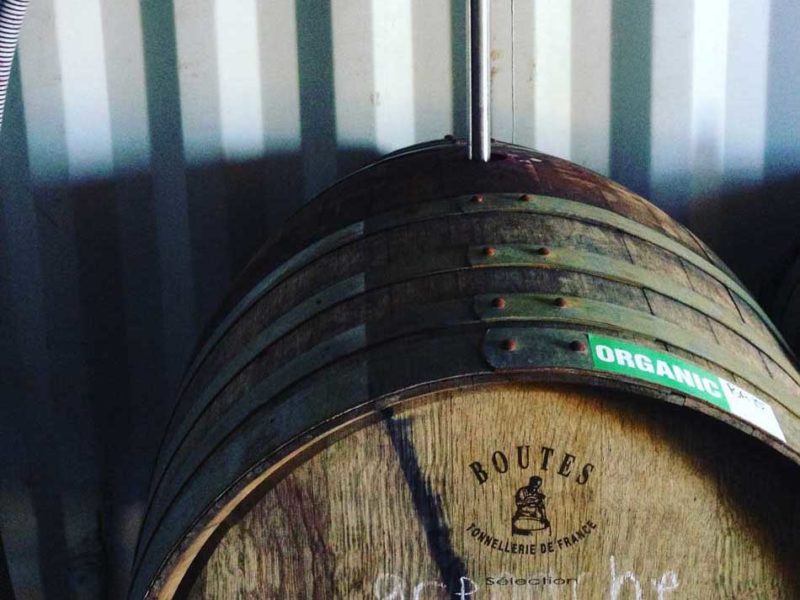 This, of course, made it challenging to agree on regulations for making of organic wine, leading to discrepancies particularly in the issue of the addition of sulphites, and organic regulations developed differently around the world. The European Commission came to its conclusion in 2012, after some debate, that the use of sulphites would be allowed: wine could be considered “organic” if the wine is made with organic grapes and sulphite level is below between 100 and 150 parts per million (ppm), or 100 to 150mg/L, at bottling.

The USA were much stricter in their allowances made by the National Organic Program (NOP) in 2002, and overall much more complicated. Wines made with added sulphites that measured less than 100 ppm could be sold as “made with organic grapes”, but not as “organic”. They also required the winemakers who wished to add sulphites to include a label on the bottle saying, ‘contains sulphites’. Now, as we will see shortly, this very vague label could technically be used on any wine ever made, added sulphites or not. Thus, at this time according to the US standards, you can only sell your wine as organic if it has less than 10 ppm of sulphites at bottling.1 Confusing, right?! But, the ultimate question is: why did they want to limit sulphites at all?

What’s the deal with sulphites in wine?

As mentioned before, sulphite additives were first introduced into wine to prevent the growth of unwanted bacteria, and basically to prevent the wine from going bad. It is even suggested that the ancient Romans used sulphur to sterilize wine vessels3, and today the use of SO2 is a common practice in winemaking. With the organic movement, organic winemakers had two major reasons for wanting to omit the use of sulphites in wine. The first was to protect the environment and people from the impact of the agrochemical industry. But, the second reason was a little more of a trend: to create wines that were a “pure” expression of their natural environment, “untainted by the flavour of additives”1, which was influenced by the French négociant Jules Chauvet.1,4 The impact that sulphites have on the flavour of wine has indeed been confirmed by some winemakers, who suggest that added SO2 “mutes the delicate nuances that express vintage or vineyard character”, as said by Simon Woolf in Decanter magazine.5 Therefore, organic winemakers insisted that the reduction of sulphites be an imperative in organic certification.

Of course, what many of these certification bodies are unable to clarify in their ‘sulphite limits’ is the difference between natural and added sulphites. Additives are not the only way that sulphites get into your bottle of wine. Sulphites, such as SO2 and other sulphur (S) containing compounds, are in fact a natural biproduct of the fermentation process.6,7 The naturally occurring S-containing substances in grape musts and in yeast metabolism both contribute to the presence of S-containing compounds in the final wine product.1,8 On top of that, different species of yeast produce different levels of sulphur compounds, some higher than others.6,7 And if you ferment your wine with native yeast like we do in Nativo wines, you are likely to have a diverse combination of yeast species which could accumulate different types and quantities of sulphites in your wine.6 This may even mean, as pointed out in the renowned wine magazine Decanter, that your natural sulphite content reaches above the USA threshold of 10mg/L naturally without adding anything at all! To make matters more complicated, many organic certification systems allow the use of SO2 as an anti-bacterial treatment for winemaking equipment, leaving more opportunity for sulphites to make their way into the wine. So, exactly how much sense does that ‘contains sulphites’ label make? Surely ‘contains added sulphites’ would make more sense?

While it is impossible to make completely sulphite-free wine (unless you chemically remove it), it is possible is to minimise the sulphite quantity you ADD. But, it is difficult to add zero without running into some problems. The consequences of no added sulphites were seen at the start of the organic movement, when a handful of organic wines turned to vinegar, or just simply tasted really bad, in the absence of SO2 additive. This put a serious dent in the reputation of organic wine that lasted for decades, and still often influences people’s decision to try an organic wine. Believe it or not, for a time up to about 2010, labelling your wine organic was NOT beneficial to sales.1 In fact, we had quite a bit of trouble at the start of Nativo in the early 2000s trying to convince people at Johannesburg wine shows that wine could be organic AND taste good too!

To this day, winemakers who opt to add no sulphites – creating a whole new category called natural wine – stand a much higher chance of losing it all. In fact, some nearly have. Take for example Henri Milan, the maker of sans soufre cuvées, who “lost nearly his entire 2000 vintage when bottles and vats started to referment”, according to Isabelle Legeron MW’s seminal book, Natural Wine: an introduction to organic and biodynamic wines made naturally. Whether this was the sulphur’s fault (or the lack thereof), or simply an unrelated winemaking hiccup, you can probably guess that even winemakers who are super conscious about the impact of sulphites are reluctant to use none, as they are at higher risk of losing a great deal. Plus, there’s a much higher chance of their customers getting one unlucky refermented bottle in a case of six… and I don’t think most customers would be a fan of unintentionally unleashing something resembling a biological weapon in their house. As such, all organic certification bodies allow a certain level of sulphites in organic wine.

So, what does this mean for my health?

While the main winemaker-worry is “how do the sulphites affect the flavour of my wine”, the main concern from the customers’ perspective is: “how do the sulphites affect my health?”. Over the years, speculations have spontaneously turned into facts, and every third person in a bar is quite certain that sulphites are the reason for their hangover. Now, there is definitely no denying that sulphites can cause asthmatic symptoms, as approximately 3% of the population have allergic reactions to sulphites. However, you are more likely to have a reaction to a packet of dried fruit, which packs up to 6 times more SO2 preservative, than you are to a glass of wine. And while I have certainly gotten a blocked nose from a glass of conventional red, I can imagine the cause stemming from far more harmful things than sulphur that go into growing your average conventional grapes. In fact, a review by the American Society of Enology highlights studies which suggest that people who have reactions to wine containing sulphites could be reacting to other components in the wine instead.9

While there are no studies that implicate sulphites as the cause of a headache, it seems that an asthmatic or congestion response is associated with sulphites at much higher levels than those allowed in organic wines, such as in various meat and seafood products10, and mostly in individuals who have an allergy (i.e. they lack enzymes necessary to metabolise it) or are asthmatic.11 One study reported a reaction at 350mg/L total SO2, but no reaction at lower levels such as 150mg/L, which is the average concentration in organic wines. In some cases, no allergic reaction was recorded until 750mg/L, which is 7 times higher than what is allowed in organic wine.12,13 So that blocked nose you’re getting is probably more related to things that were put on the grapes before the SO2 was even in the picture.

The debate surrounding the use of sulphites has seldom reached a consensus, and remains so to this day. However, one agreement that can be made is that the concentration of sulphites allowed in organic wine is unlikely to affect your health and are much lower than those in conventionally produced wines. And most importantly, amidst the disagreement, other more important characteristics of organic wine have remained undebatable. The lack of -cides and other toxins in the wine-growing and winemaking process, regardless of the use of sulphites, means that organic wine (or wine with organic principles) has a much lower impact not only on the environment, but on your health.14